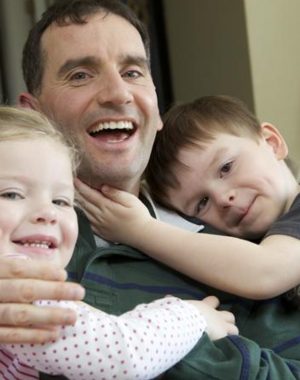 On May 18th, 2006 Michael was driving to Kelowna with his former spouse and seven-month-old twins, to attend a work function and stay with friends. Catastrophe struck while on the Coquilhalla highway — Michael lost control of the van and it rolled at least one and a half times.

Michael was unresponsive, with evidence that the airbags had deployed and he was restrained by his seatbelt.  He was in a comatose state.

He was transported by air to Royal Inlands Hospital in Kamloops where he was assessed by a Neurosurgeon. Later, he was transferred to Royal Columbian Hospital to be closer to his family where he remained comatose.

Michael’s injuries were nearly fatal and despite comprehensive treatment at two hospitals, he remained in a coma for six and a half months. Doctors told his family that his chances of recovery were remote. His wife Ann was devastated, facing the challenge of raising their two babies without a father. Recommendations were made to his family to look for a long-term care facility to look after him for the rest of his life.

Following research undertaken by Michal’s family on the benefits of HBOT (Hyperbaric Oxygen Therapy), in a closed in chamber, a family decision was made to allow Michael to undertake this therapy. Michael’s mother accompanied him in the chamber on a daily basis in a private clinic in Richmond. After the 3rd session in the chamber, Michael began showing the first sign of recovery.

Although Michael was in a power wheelchair, unable to stand on his own, the family heard about the Lokomat Machine, the world‘s leading robotic medical device that provides highly repetitive and the most physiological gait training. He began weekly sessions under Pauline Martin’s guidance at NeuroMotion in Vancouver. Progress was noticed from week to week. Michael went from a power wheelchair to a manual wheelchair, and is now walking with a single cane, and soon without a cane.

Today Michael serves as an inspiration and catalyst for traumatic brain injury survivors everywhere. He currently resides in a group home not too far from his family and visits with them weekly. His long term goal is to be an able and active participant in his family’s life.

In 2007 Michael learned about Rick Hansen’s Wheel s in Motion events to raise funds for research and to improve the quality of life for people with spinal cord injuries. Michael was inspired by Rick Hansen and wanted to give back to Society and be part of the event. In the midst of his rehabilitation, he canvassed his network of friends, family members, Molson Coors co-workers, and raised over $22,000. His team not only won the award for the top fundraiser in Canada for Wheels in Motion, they also set a fundraising record for the entire six year history of the program.

Michael Coss Brain Injury Foundation, was started in order to assist children with brain injury to access hyperbaric oxygen treatment (HBOT) and/or alternate therapies that are not covered by the medical system in Canada.

Established in early 2013, the fund’s purpose is to provide financial support to a broad range of treatment options that may otherwise be unavailable to a child suffering from brain injury. Priority will be given to support for a child determined to be most likely to benefit from alternate therapies, whose family or support team do not have the means for such treatments.

The fund's conditions were amended in 2014 to also allow for grants to be made: for initiatives aimed to educate brain-injury survivors, caretakers, health professionals and rehabilitation teams, including sharing of success stories that raise awareness with the public including Acquired Brain Injury and Traumatic Brain Injury survivors, their families and medical professionals; and to support research and development initiatives which may help gather and advance scientific evidence for promising new rehabilitation options for children and others recovering from acquired/traumatic brain injury and related injuries.

This is a donor-advised fund advised fund where the donor seeks applicable organizations to support.

There are two popular ways you can donate to this fund. First, a cheque made payable to the Coquitlam Foundation can be sent to:

Include a note that the donation is for the "Michael Coss Brain Injury Fund". Donations sent this way of $25 or more will receive a tax receipt.

The second way you can donate is through our online donation system, which is provided by Canada Helps, a non-profit organization. Through a fee of 3.5% to cover the cost of the credit card charge Canada Helps will issue you a tax receipt directly for your donations. We thank them for their partnership.