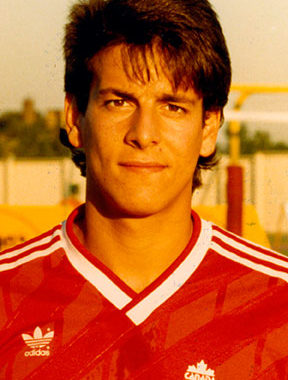 Born in Vancouver, British Columbia, Mobilio was a long-time member of the Vancouver 86ers turned Vancouver Whitecaps. He played 14 seasons beginning with the team in the Canadian Soccer League, later joining the American Professional Soccer League, before finishing up a Whitecap. He retired from the professional outdoor game in 2001.

Upon retirement, Mobilio worked as a technical director with the Coquitlam City Soccer Association and became a coach of youth soccer in Coquitlam.

The fund's purpose will be to assist members of the Coquitlam City Soccer Association to pursue post secondary education programs in memory of Domenic Mobilio.

There are two popular ways you can donate to this fund. First, a cheque made payable to the Coquitlam Foundation can be sent to:

Include a note that the donation is for the "Coquitlam City Soccer Association Domenic Mobilio Bursary Fund". Donations sent this way of $25 or more will receive a tax receipt.

The second way you can donate is through our online donation system, which is provided by Canada Helps, a non-profit organization. Through a fee of 3.5% to cover the cost of the credit card charge Canada Helps will issue you a tax receipt directly for your donations. We thank them for their partnership.